Platinum Financial Services Ltd was established in 1999 and has been offering independent, impartial advice to both the public and business ever since.

We are Independent Financial Advisers offering all aspects of financial advice and specialise in the management of client’s capital growing steadily since inception and now manage assets estimated up to £110 Million. We operate very much as a team having  three authorised Financial Advisers Mark Loran, Roger Miller and Daniel Loran and a specialised mortgage and insurance adviser Dave Tagg and four administrators. See below for more details on our dedicated team.

We believe the structure of our company allows our clients to be looked after on a more personal basis with no call centres being used, our clients are treated quickly with dignity and respect. We have the assistance of a large company behind us, Bankhall, from whom we purchase both compliance and technical services. We are fully authorised and regulated by the Financial Conduct Authority allowing our clients to be covered by the Financial Services Compensation Scheme with full professional Indemnity Insurance.

Mark gained 10 O levels and 3 A Levels at: Sandbach Grammar School. From there he gained entry to the University Of Kent at Canterbury where he studied Economics for 3 years and gained his degree a BA Hons.

In 1985 Mark began his career With Royal Life (later Royal Sun Alliance) where he became one of their top advisors in the UK and won many awards. He gave financial advice on both a domestic and corporate level for Royal and on many occasions qualified for the honours of overseas conventions. Whilst there, Mark completed his Certificate in Financial Planning.

At the end of 1999 Mark left Royal and Sun Alliance to start his own business as an Independent Financial Advisor forming Platinum Financial Services Ltd. Whilst at Platinum Mark has completed his Mortgage advice qualification and more recently a Diploma in Financial Planning.

Mark believes his strengths are in his knowledge of the financial markets which he follows daily. This is then reflected in the funds advised and ultimately the return his clients receive. The Business has grown from strength to strength under his guidance.

Roger obtained 9 O-levels and 4 A-levels and went on to study Engineering at Leeds University. After obtaining his Honours degree in engineering, which gave him a great foundation for figures and technical problems, like many engineers of his time he branched out into finance.

Initially, this was into Accountancy were he successfully completed the AAT courses before being given the opportunity of client financial planning with the Co-operative Insurance Society. Whilst there he completed his Certificate in Financial Planning.

In 2000, after 5 years as a tied agent, Roger was given the opportunity with a new independent financial advice firm, Platinum Financial Services Ltd. where he has enjoyed great success since.

Since joining Platinum, Roger has increased his knowledge base specialising in Investment and Pension advice both for corporate and personal clients. He has also completed in 2011 two years before the FSA deadline the Diploma in Financial Planning which enables him to give further specialist advice in the new Independent advice era.

As well as specialising in Investment and Pensions advice, Roger also specialises in Family protection an area he feels strongly about after having had some personal experience on this matter. 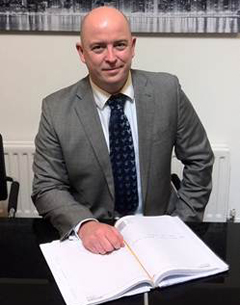 Dave qualified as an Engineer in 1975 after attending Hugh Baird College for 5 years. He then progressed to lead a team of skilled Engineers within GEC a multinational company, his technical, analytical and fault finding skills were easily transferred to the financial sector to enable him to structure client’s financial solutions.

His career in financial services began in 1981 with the Co-operative insurance society where he ran an insurance agency covering all aspects of insurance services and investments, he quickly became one of the top advisers within his branch and won many regional and national awards. During his time at the CIS he completed his financial planning certificate and mortgage advice qualification he has a wealth of experience spanning more than thirty years and became an independent financial adviser in 2006 to be able to offer his clients a whole of market service.

He joined Platinum Financial Services in April 2013 and now specialises in the mortgage, protection and estate planning areas of financial advice.

Dave is a keen sportsman and likes to keep fit, he plays table tennis in the Liverpool League and won a gold medal in the Corporate Games in 2005. In his youth he trained in up to black belt standard in Shotokan Karate and was part of the famous Red Triangle club where he competed both at local and national events. He was a member of the Territorial Army for 27 years and seen active service in Iraq in 2003, he now volunteers his services as an adult instructor with the Merseyside Army Cadet Force.

Daniel joined Platinum Financial Services in 2007. Ever since working in the financial services industry, Daniel began his journey to become a qualified Independent Adviser by taking his exams via the Chartered Insurance Institute and the Institute of Financial Services. Now level 4 qualified, he offers a holistic approach to Independent advice on Investments, Retirement planning, Protection and Estate planning areas of financial advice.

Having been with Platinum for nearly 10 years, with his support he has taken pride in helping the company go from strength to strength based on the underlying ethos of providing clients with quality advice and support and at the same time strengthening relationships between our clients and the company.

Daniel recognises that some clients feel Financial Planning can seem like a daunting and complex subject with ever changing regulations and ever increasing options, but he believes that his passion to guide clients through the process giving clear and understandable solutions to fit their needs will help make the process seamless for clients. His aim is to provide help and on-going advice to clients throughout their entire financial journey, whatever age they may be.

Daniel is also a keen sportsman and likes to keep fit. In his spare time he enjoys attending a variety of sports and social events such as football, tennis, horse racing and musical concerts. In his youth Daniel trained with Crewe Alexandra FC before a bad knee injury curtailed any footballing aspirations.